Modeling Piezoelectricity: Which Module to Use? 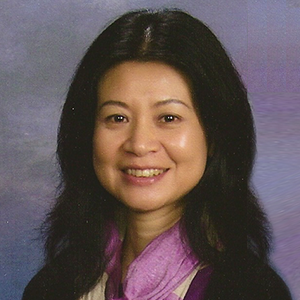 You may wonder which of the add-on modules to the COMSOL Multiphysics® software you should use to model piezoelectric devices. It depends on the types of materials included in the system and the specific features you want to use in the analysis. Let’s take a closer look at these different products and see what they offer.

The Piezoelectricity interface combines the Solid Mechanics and Electrostatics interfaces with the constitutive relationships required to model piezoelectric phenomena. Both direct and inverse piezoelectric effects can be modeled. The piezoelectric coupling can be formulated using either the strain–charge or stress–charge form.

There are three modules within the Structural Mechanics & Acoustics Modules branch that offer this feature for simulating piezoelectricity:

The diagram below illustrates the most commonly used features related to piezoelectricity modeling that these modules provide. 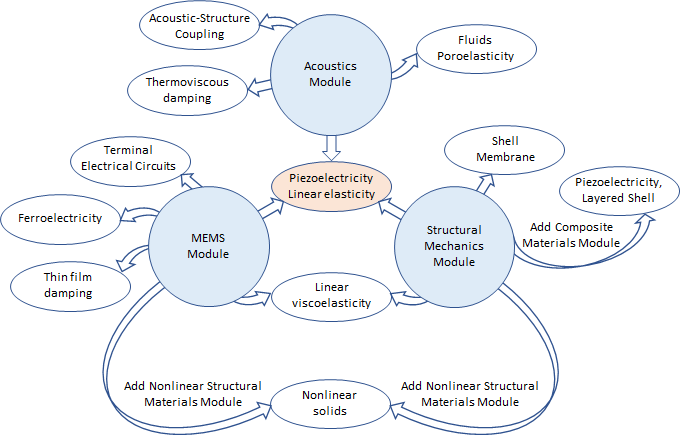 Overview of Modules for Modeling Piezoelectricity

The Acoustics Module includes dedicated tools for modeling wave generation and propagation in:

It is the only product that offers built-in features for capturing wave behavior in fluids and porous materials. The Acoustics Module allows you to model acoustic–piezoelectric interaction problems with predefined multiphysics couplings that combine the Pressure Acoustics, Solid Mechanics, and Electrostatics interfaces.

You can model a piezoelectric device as both a transmitter and a receiver at the same time, as demonstrated in these tutorial models:

A piezoelectric transducer is used to transmit and receive sound.

In scenarios where solutions in fluids are not of interest, you may still need to include fluids in the model to account for thermovisous losses in order to study the damped vibrations of MEMS structures. You can see examples of this in the following tutorial models:

When there are solids other than linear elastic materials included in the model, you need the Structural Mechanics Module or MEMS Module. Each by itself supports linear viscoelastic material models, including the generalized Maxwell, standard linear solid (SLS), and Kelvin–Voigt. Viscoelastic materials may be used as backing layers of composite piezoelectric transducers or in any parts of the structure to damp vibration, as shown in the Viscoelastic Structural Damper and Damping Pad with a Constrained Layer tutorial models.

Mesh and displacement results of a viscoelastic structural damper (left) and a piezoelectric valve model (right).

In cases when materials have a nonlinear stress–strain relationship that needs to be accounted for, the Nonlinear Structural Materials Module is then also necessary. It is an add-on to the Structural Mechanics and MEMS modules and extends them with support for modeling nonlinear materials, such as hyperelasticity, creep, plasticity, and viscoplasticity. This is exemplified in the Piezoelectric Valve tutorial model.

The MEMS Module includes a Terminal feature that allows you to connect a piezoelectric device to an electrical circuit. The electrical circuit can be used to excite the transducer as well as receive detected signals. The Terminal feature also enables the computation of the lumped parameters of the piezoelectric device, such as admittance and scattering parameters (S-parameters). By activating a manual terminal sweep, you are able to run a parametric sweep over terminals and obtain the scattering parameter matrix. 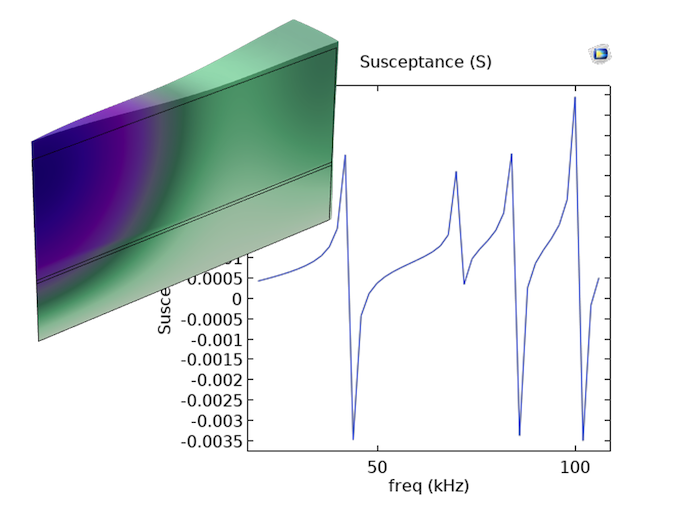 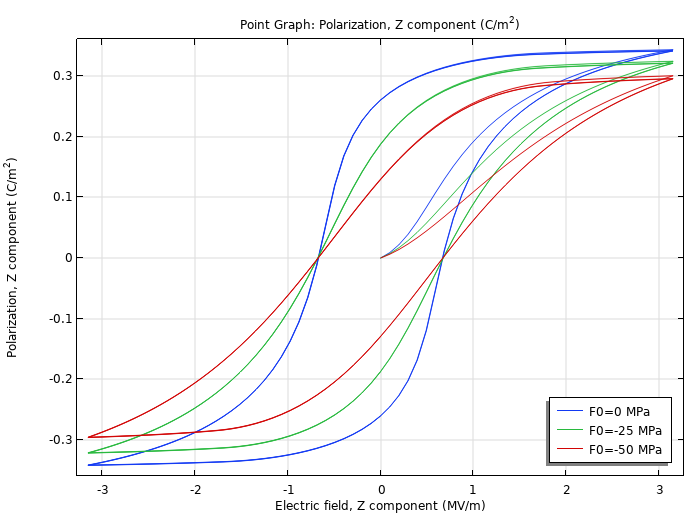 The susceptance levels for a composite laminate transducer (left) and polarization hysteresis loops for different values of an actuator made of ceramic material (right).

The MEMS Module also provides thin-film damping features that can be used to model the damping in a thin layer of fluid between two structures that move relative to each other. It is usually referred to as squeeze-film damping or slide-film damping, depending on whether the motion of the structure is perpendicular or parallel to the film plane. This feature is available either as a Thin-Film Damping boundary condition used in a Solid Mechanics interface or a standalone Thin-Film Flow interface that can be coupled to a Solid Mechanics physics interface, as shown in this benchmark model of a transient elastohydrodynamic squeeze-film interaction.

Another relevant feature included in the MEMS Module is the Ferroelectroelasticity interface. It allows you to model a piezoelectric material in its ferroelectric phase, when the material exhibits spontaneous polarization. Ferroelectric materials exhibit nonlinear polarization behavior, such as hysteresis and saturation at large applied electric fields. An example is the Hysteresis in Piezoelectric Ceramics tutorial model. 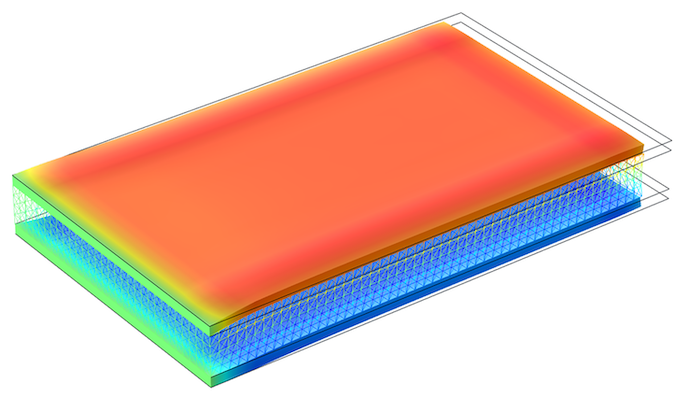 To summarize, when you model piezoelectric devices alone and the devices include only piezoelectric materials and linear elastic materials, you can use either the Acoustics Module, MEMS Module, or Structural Mechanics Module.

The MEMS Module gives you access to the Terminal feature and connects piezoelectric transducers to external electrical circuits. Thin-film damping features can be used to capture damping in thin layers of fluid for moving microstructures. It also allows you to simulate the ferroelectric effect of piezoelectric materials.

The Structural Mechanics Module provides efficient modeling features like the Shell and Membrane interfaces. It also offers the Piezoelectricity, Layered Shell feature when the Composite Materials Module is added.

If you already have either the Acoustics Module or the Structural Mechanics Module, which provides the piezoelectricity feature, then the AC/DC Module would also give you access to the Terminal, Electrical Circuits and Ferroelectricity functionalities.

Of course, what has been addressed here does not cover all possible scenarios in which piezoelectric materials can be used. For instance, modeling a tunable evanescent mode cavity filter using a piezoactuator calls for the RF Module.

Want to discuss your specific application or learn about any of these modules in greater depth? Contact us via the button below: