To keep our antenna modeling process efficient and accurate, we should start with a simple geometry and then gradually add more complex features. The final simulation needs to include enough detail to accurately represent our design, while excluding elements that needlessly increase the computational cost. To demonstrate this, we look at an anechoic chamber example, which is used to characterize antenna performance, before examining how this process applies to several antenna examples available in the COMSOL Multiphysics® software.

Since antennas radiate electromagnetic waves, it is important to ensure that their radiated fields don’t return to the radiating source. The absorbers attached to the chamber’s walls play a major role in this process by absorbing incident waves on their surfaces. This makes the anechoic chamber a key aspect in an antenna simulation. However, including the anechoic chamber is challenging because it increases the simulation’s computational requirements. 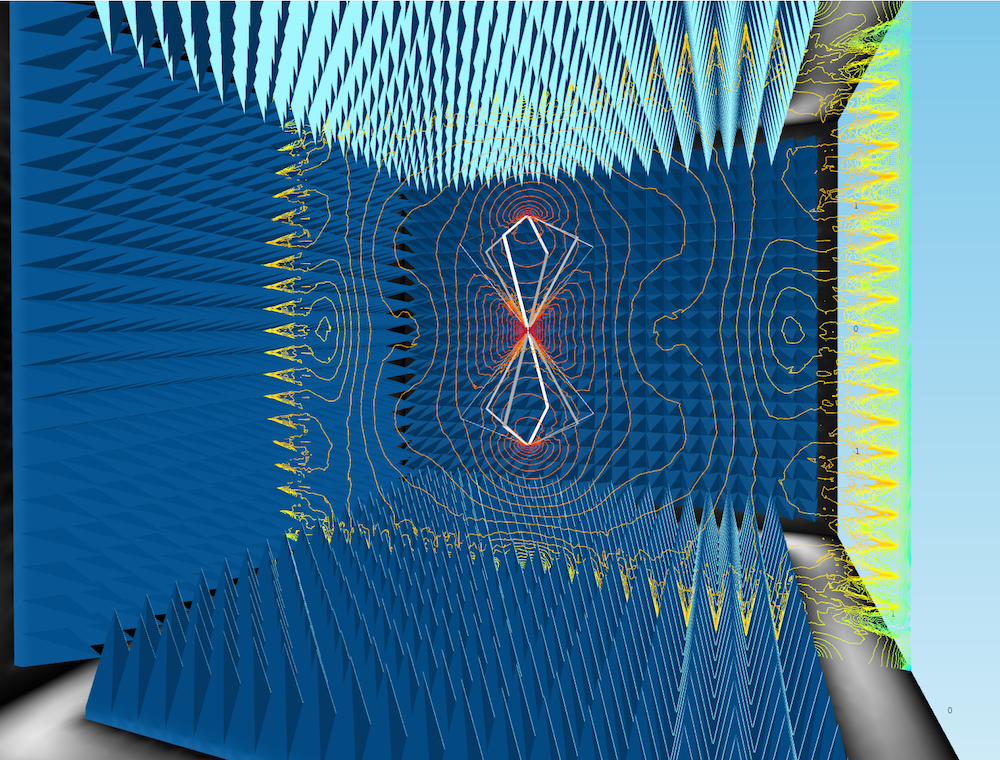 The anechoic chamber shown above is smaller than the typical anechoic chamber that meets CISPR specifications, but its computational cost is still high. This model requires over 16 GB of RAM. To improve computational efficiency, we should simplify the model, while maintaining the accuracy of the computation. As discussed in a previous blog post, we can accomplish this by using a perfectly matched layer (PML). This reduces the memory use to less than 2 GB without sacrificing simulation accuracy.

How to Set Up an Antenna Model in COMSOL Multiphysics®

To efficiently mimic the real world in our antenna simulation, we need to choose the correct boundary conditions and physics features. Accurately reflecting real-world conditions in your simulation environment, while still keeping your model memory and time efficient, can be challenging. In the table below, we outline some real-world antenna scenarios and the optimal modeling feature to choose.

When setting up an antenna model, you do not need many complicated boundary conditions. You can actually build an antenna in COMSOL Multiphysics by deploying only four features. Let’s see how to do this with a printed dipole antenna example. 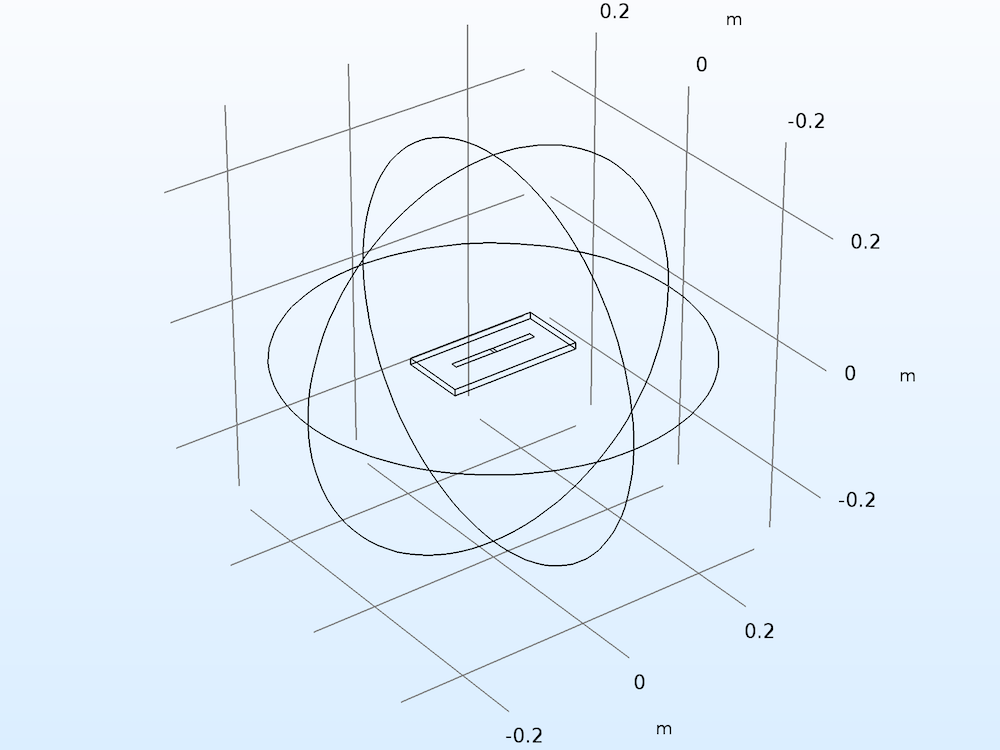 The geometry of a printed dipole antenna.

The geometry is configured with only two materials: a user-defined polystyrene foam board and the air that encloses the simulation domain. Use the following table to choose the correct physics features: 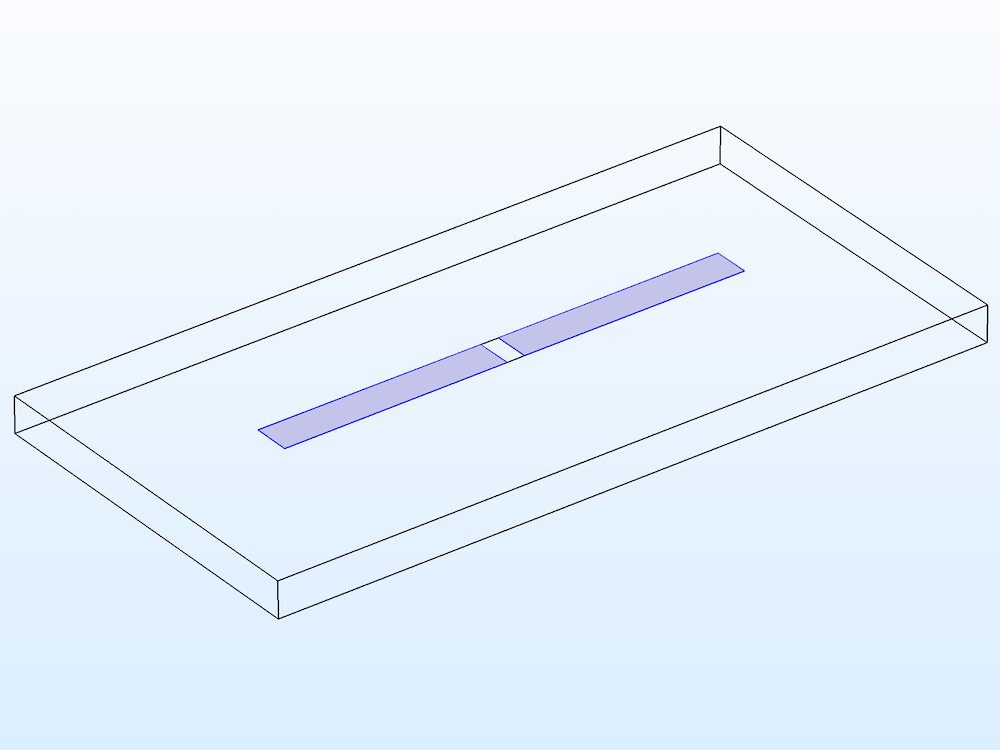 For the intended operating frequency, the simulation may only take a few seconds. The RF Module provides the default S-parameter evaluation, electric field distribution plot, and polar far-field plot. It also gives you the 3D far-field radiation pattern plot, which shows the computed directivity and gain. 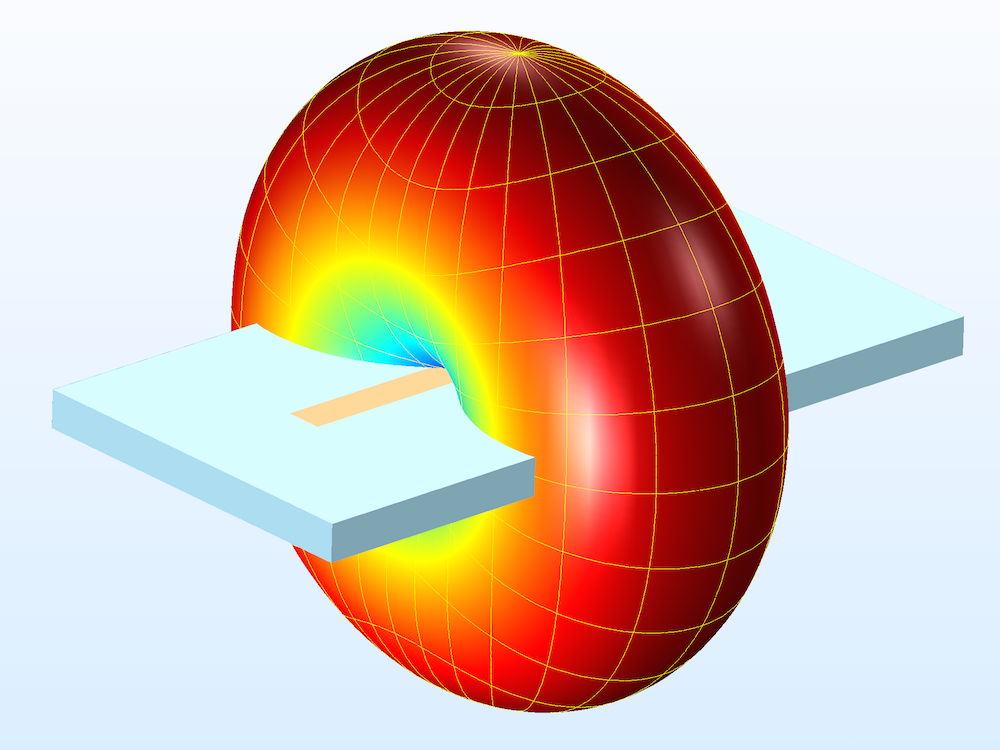 The far-field radiation pattern of a printed dipole antenna. The computed directivity is 2.15 dB, which is close to that of an ideal half-wave dipole antenna.

Although simulating an antenna is a straightforward process, it is a good idea to start with a simple structure, whether you are a beginner or an expert. This way, you can ensure that the basic modeling process is correct for the simple geometry before adding complex design elements.

The RF Module also enables you to combine electromagnetics with any other type of physics. You can see and change all of the physics features in the modeling environment and clearly define every physics property. Taking into account multiple physical effects, as well as knowing the underlying physics involved, is useful when validating your antenna design.

After setting up these physics features, you can begin to design your antenna, whether its shape is traditional, wideband, multiband, or an array.

Designing a Variety of Antennas with the RF Module

You can access many antenna examples for a wide range of applications in the Application Library in the RF Module. The tutorial models range from conventional antennas, such as half-wave dipole and microstrip patch antennas, to wideband and multiband antennas, including Vivaldi, fractal, spiral, and helical antennas. There is also an antenna array example, which can be useful when designing devices for the 5G mobile network.

Traditional antennas, like the half-wave dipole and microstrip patch antenna shown below, are good examples to start with when learning how to model antennas in the COMSOL Multiphysics® software. Their geometries are relatively easy to build and it’s simple to validate the results with well-known analytical solutions.

For example, you can simulate a half-wave dipole antenna to find its omnidirectional radiation. Or, you can model a microstrip patch antenna to see if the electric field is confined to the radiating edges. 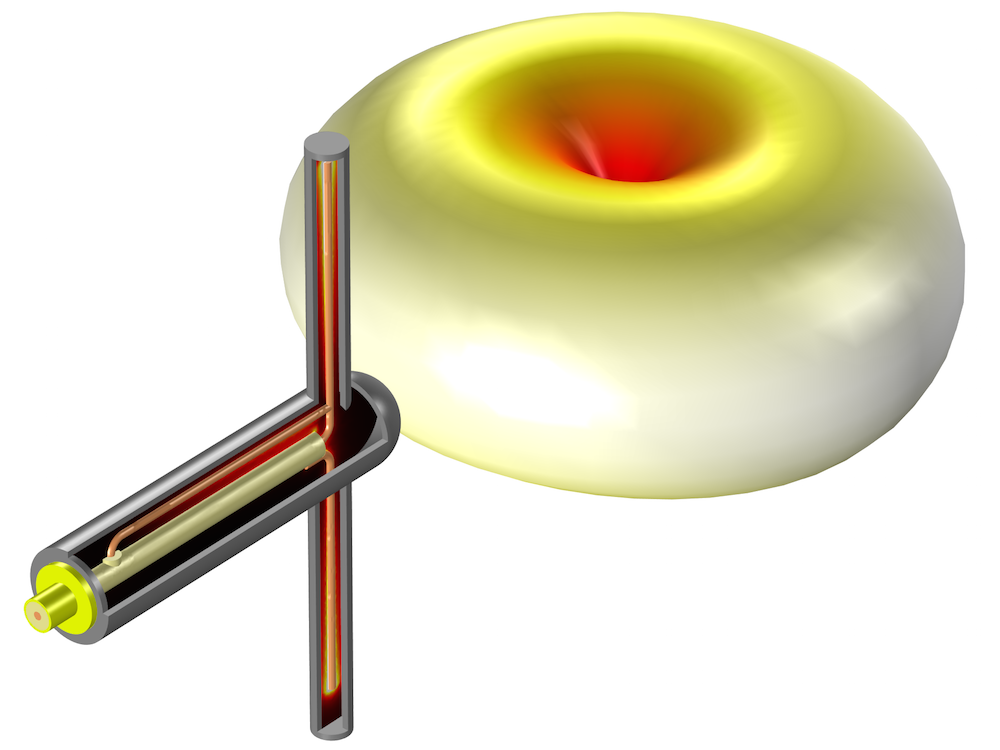 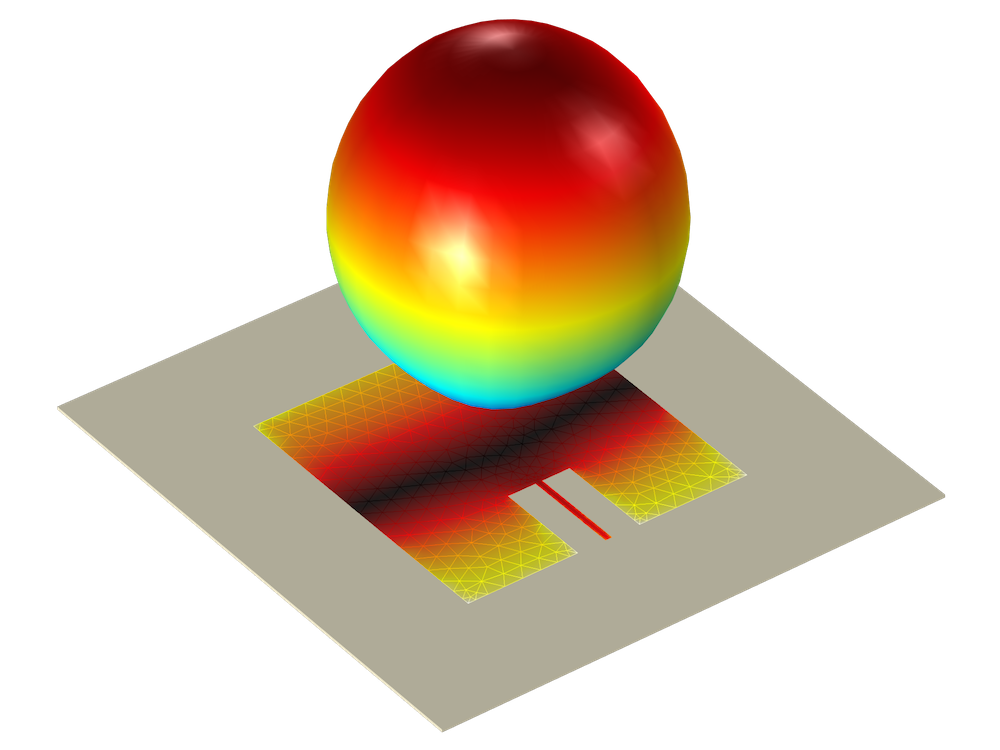 Sometimes, we need to cover many different frequency ranges with a single antenna. By tweaking the radiating structure and using the multiple resonance behaviors of a certain part of the metallic body or slot, we can meet the system’s specifications without deploying multiple antennas. One such example is the popular Vivaldi antenna, also called a tapered slot antenna.

Using fractal algorithms, such as those from Sierpinski, Koch, and Hilbert, you can generate interesting results for antenna applications. For instance, unlike the half-wave dipole antenna, which can only be used for a single frequency resonance, the Sierpinski fractal antenna doesn’t require additional matching networks to adjust the antenna input impedance to the reference characteristic impedance of 50 ohms for higher-order resonances. 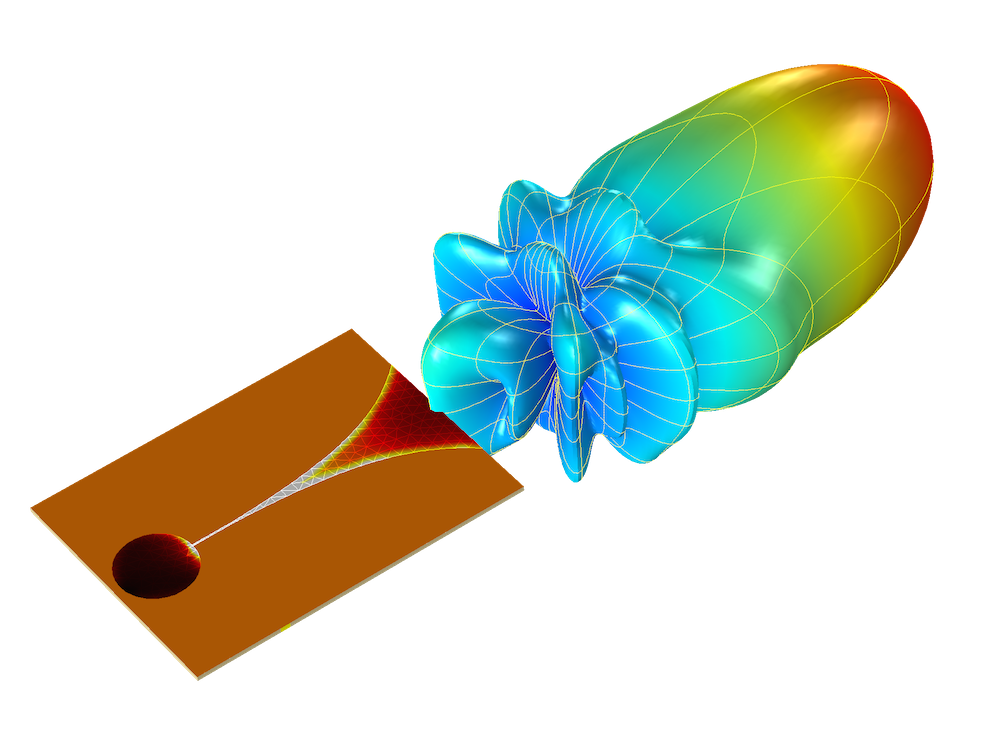 When the input power to your antenna is regulated due to the path loss in a communication link budget, your initial design may not fulfill its needed specifications. This is a potential issue that the 5G mobile network faces and it can be resolved using an antenna array.

In COMSOL Multiphysics, we can access all of the equations that are being solved and modify them with an alternative formulation. We can also create an antenna array simulation app that allows us to control the implemented equations and the parameters that we’d like to change. 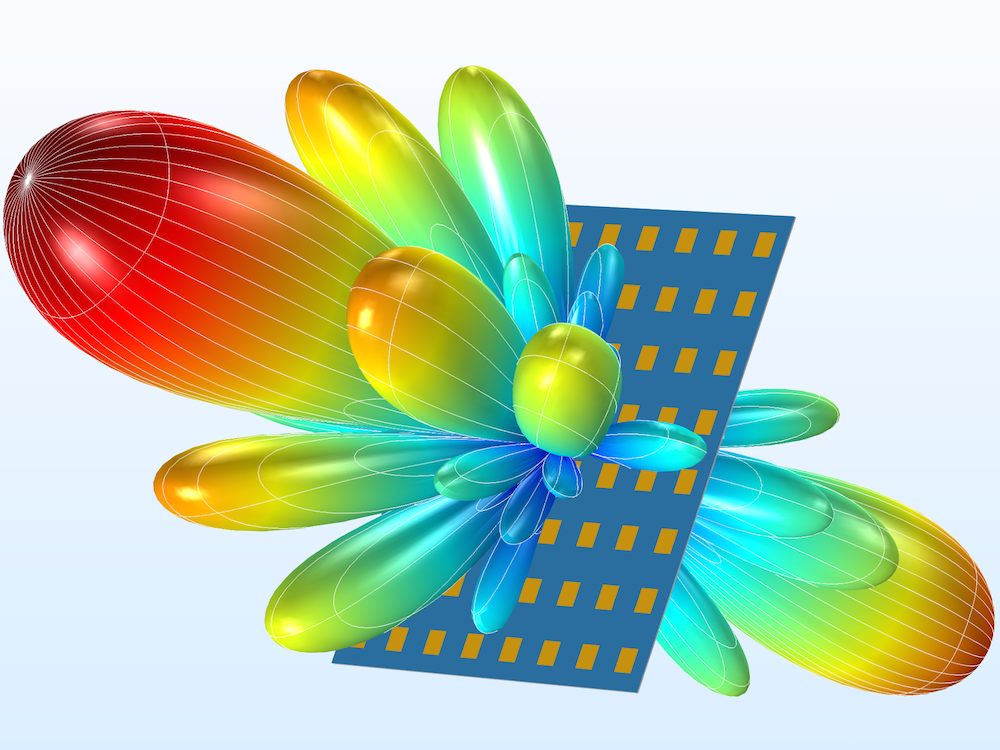 In order to characterize your antenna system and evaluate its EMI/EMC, it has to be measured in an anechoic or reverberation chamber using one of three well-known test antennas: the log-periodic, biconical, or double-ridged horn antenna. You can examine these test antennas in your simulation and enhance their performance. These antennas are also a type of wideband antennas and usually cover 20 MHz ~ 200 MHz, 200 MHz ~ 2 GHz, and 2 GHz ~ 20 GHz, respectively. When you simulate them, you need to set the mesh either based on the highest frequency or parametrically updated for each analysis frequency during the frequency sweep. 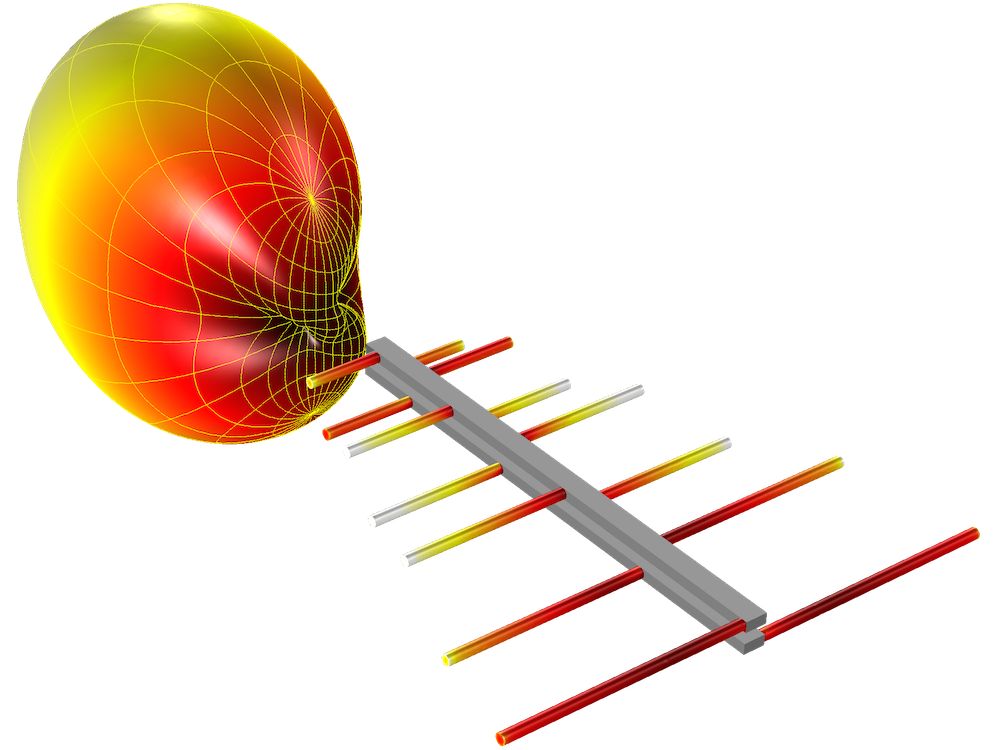 Test and measurement antennas: a log-period (left) and biconical antenna (right). These antennas are popularly used in an anechoic chamber.

The Advantages of Simulating Antennas with COMSOL Multiphysics®

You test your antenna design in an anechoic chamber, but it will eventually be deployed in real systems. You also have to evaluate the antenna’s performance when it is implemented on different types of platforms. The effect of one radiating device on another device’s system can result in problems, such as radio frequency interference. You can address these interference problems through simulation. For instance, you can use simulation to see how a car windshield’s antenna affects a cable harness and evaluate antenna crosstalk on an airplane’s fuselage. 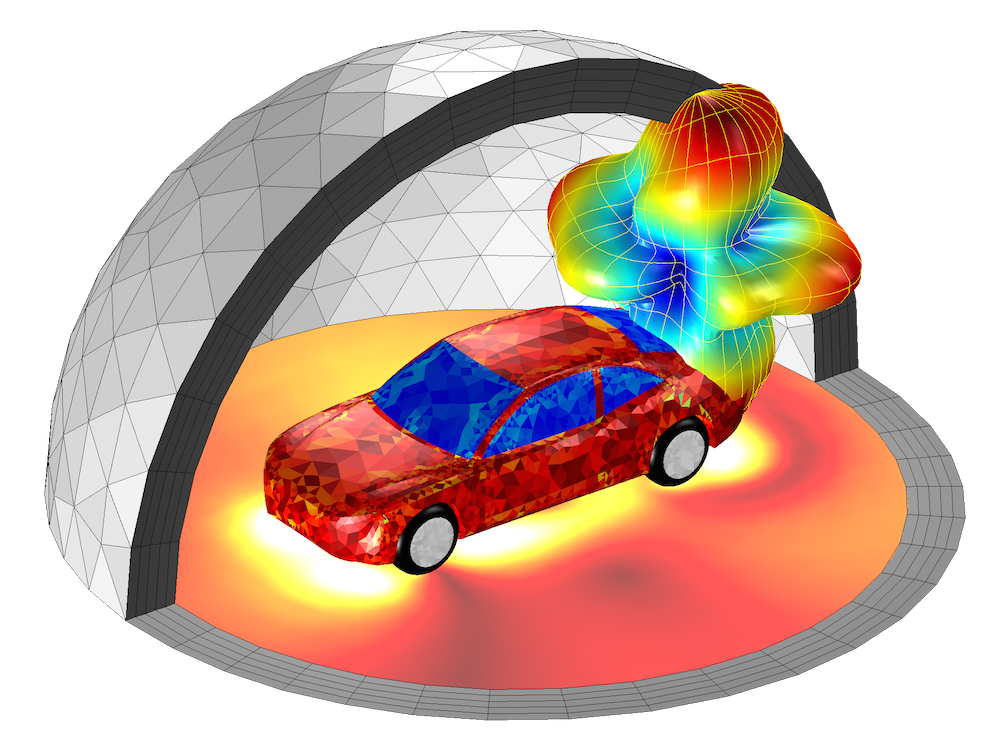 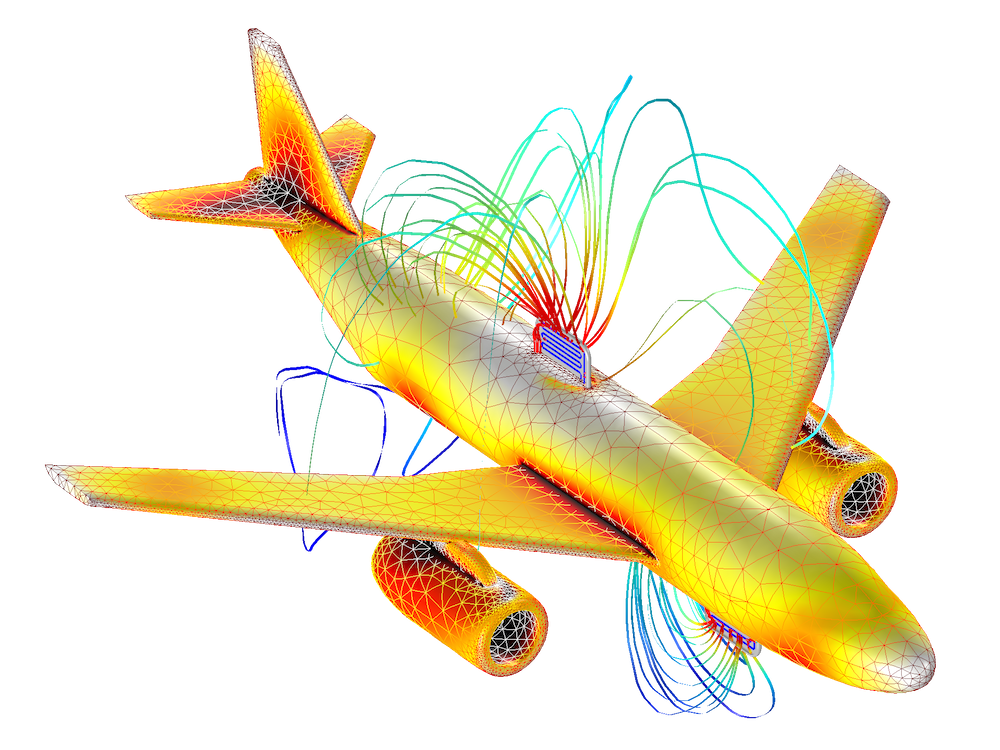 Simulation showing a car windshield antenna’s effect on a cable harness (left) and antenna crosstalk on an airplane’s fuselage (right).

With the RF Module, you can also expedite antenna modeling with the body of revolution approach, which doesn’t demand a lot of computational resources. With this approach, you can quickly model antennas like the corrugated horn antenna and conical horn lens antenna. 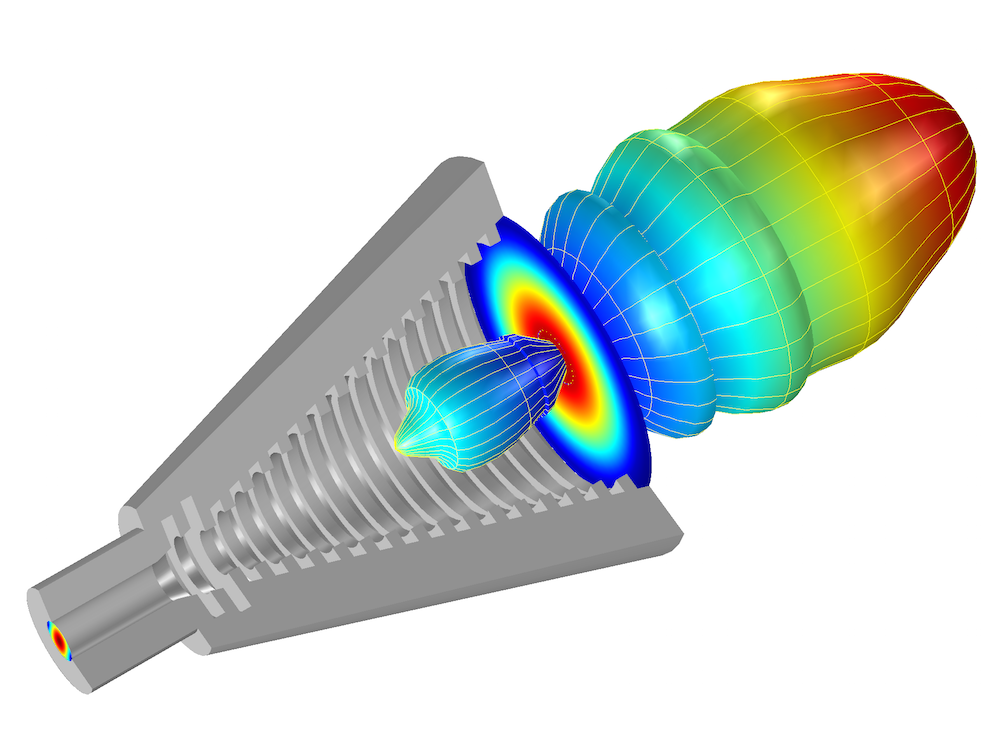 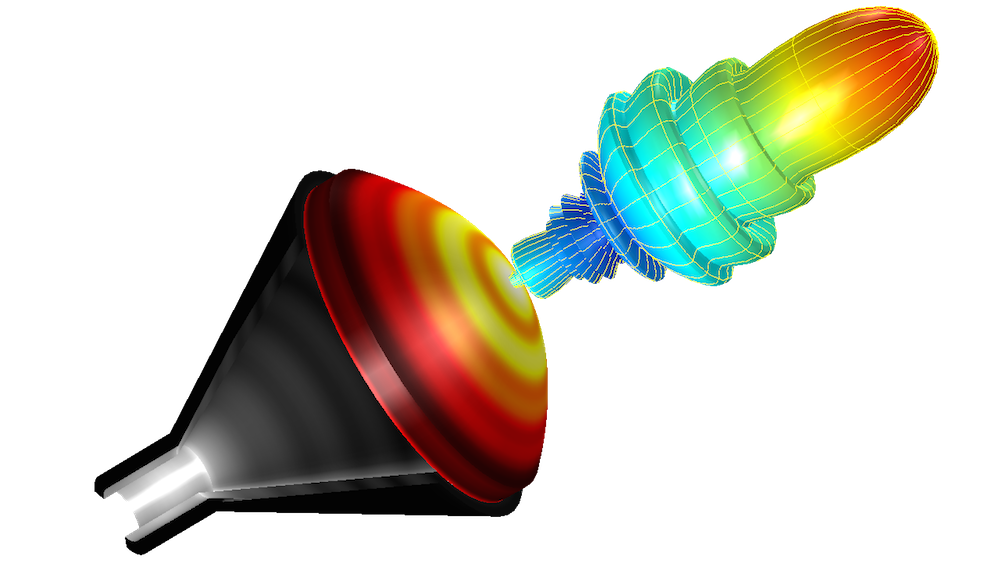 In this blog post, we briefly reviewed efficient antenna modeling techniques and several different types of antennas that can be designed using the RF Module. Each antenna model begins with a simple geometry configuration and boundary conditions. You then gradually add more complex parts and elements to your simulation. This way, you can easily debug and tune your antenna model. Using this information and the featured examples, you can start designing antennas in COMSOL Multiphysics with optimized computational efficiency and speed.

Get Started with Modeling Antennas in the RF Module

How to Create High-Quality Model Images in COMSOL Multiphysics®

Dear Jiyoun Munn,
the design really help me, then how i check the performance and the efficiency of an antenna.
the formula of Efficiency = P_out/P_in
how to set the input power to an antenna (RF input)
Thank in advance

Absolutely good enough. then i saw incident or applied voltage of 1V, how to look on output voltage of the antenna?..