From my experience, radiation is the most underestimated heat transfer process and is often neglected, which may have a devastating effect on the accuracy of the results of a thermal management study. In this blog post, let’s take a look at when and how radiation should be taken into account in any model involving heat transfer — and when it can be skipped.

The investigation of thermal processes within parts, devices, or whole buildings is a fundamental task for many industries, such as microelectronics and aerospace. When we talk about thermal processes, there are three main mechanisms that may take place:

How much each one of these processes contributes to the overall heat transfer process depends on the task and operating conditions. The proportion of each process may also vary in time and space.

In my personal experience, I find that while simulation engineers are fully aware of conduction and convection, they sometimes tend to underestimate the role of radiation. However, there are indicators that we can check to see if radiation should not be neglected in a particular model.

When Is Radiation Important?

The question is not if thermal radiation is present (it is always there), but rather how large its impact is on the overall heat transfer budget. Certain situations imply that radiation plays a significant role and has to be taken into account so that the results of a model are correct. 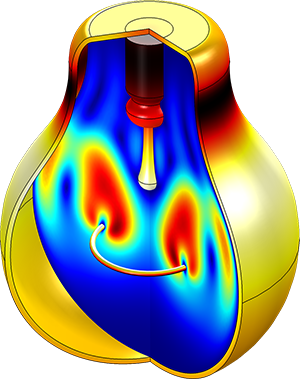 Temperature distribution within a light bulb when radiation, conduction, and convection are all accounted for.

The emissivity, ε, of a surface is the proportion of thermal radiation in relation to an ideal blackbody. Note that ε varies from 0 (no emission) to 1 (maximum emission, corresponds to a blackbody). The closer the value of the emissivity is to 1, the greater the radiation emission and thus also the amount of heat radiation of the total heat transfer. A light bulb is also a good example for a large surface emissivity because the filament emissivity is optimized and close to 1.

If large external radiant powers occur, these must be taken into account for the overall consideration of the heat fluxes. A classic example of this is solar radiation, which can play a major role especially in free-standing devices or buildings.

If the heat transfer by conduction and convection is very small (for example, in space or in vacuum systems), the percentage of heat radiation in the total heat flux naturally increases. An everyday example of this is a room in which the floor is cooler than the ceiling. Due to this temperature distribution, the stratification in such a room is stable and no natural convection occurs. Conduction is also negligibly small, as air is a good insulator. The heat radiation then remains as the dominant transport mechanism.

Conduction is quite a slow process and the velocity of convection is related to the velocity of the moving fluid. Both mechanisms happen on a much longer time scale compared to thermal radiation, which occurs at the speed of light. If you are analyzing a process on a short time scale, it may be that radiation is the only mechanism that has a measurable influence on the heat transfer.

In Any Case of Doubt: Test It!

In many cases, it is difficult to quantify the proportion of heat radiation in the overall process beforehand. In order to be sure about whether or not radiation plays a role, we should check by carrying out comparative computations with and without radiation.

Let’s have a look at a simple example and use a tutorial model from the COMSOL Application Gallery: the busbar model. This model includes conduction and convection, but does not account for heat radiation. We can include this by adding a Surface-to-Surface Radiation interface and a Heat Transfer with Surface-to-Surface Radiation multiphysics node that connects the new interface with the existing Heat Transfer in Solids interface.

The computation of thermal radiation requires us to define a value for the surface emissivity, which has to be taken from literature for titanium and copper for the busbar model. For a test, the value is set to 0.3 for both the copper and titanium. The figure below shows the temperature difference between the model without radiation and the model that takes surface-to-surface radiation into account. The difference is about 8°C, implying that radiation significantly influences the results. 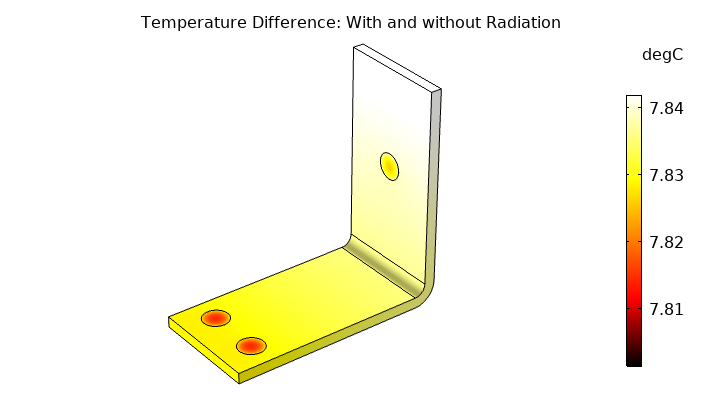 Comparison between the busbar model without radiation and the one with surface-to-surface radiation. The plot shows the resulting temperature difference between the two modeling approaches is about 8°C.

A parametric sweep with different applied voltages and a varying emissivity between 0.1 (bright metal) and 0.7 (heavily oxidized metal) for copper shows the result even clearer. Depending on the value of the surface emissivity, ε, and the applied voltage, the amount of radiation can easily dominate the heat transfer and should definitely be taken into account. Characteristics can also change within the lifetime of the device and thereby affect the heat exchanger performance. These changing characteristics can be included in the model. In this case, oxidization of the busbar occurs, which increases surface emissivity, which in turn affects the performance greatly. 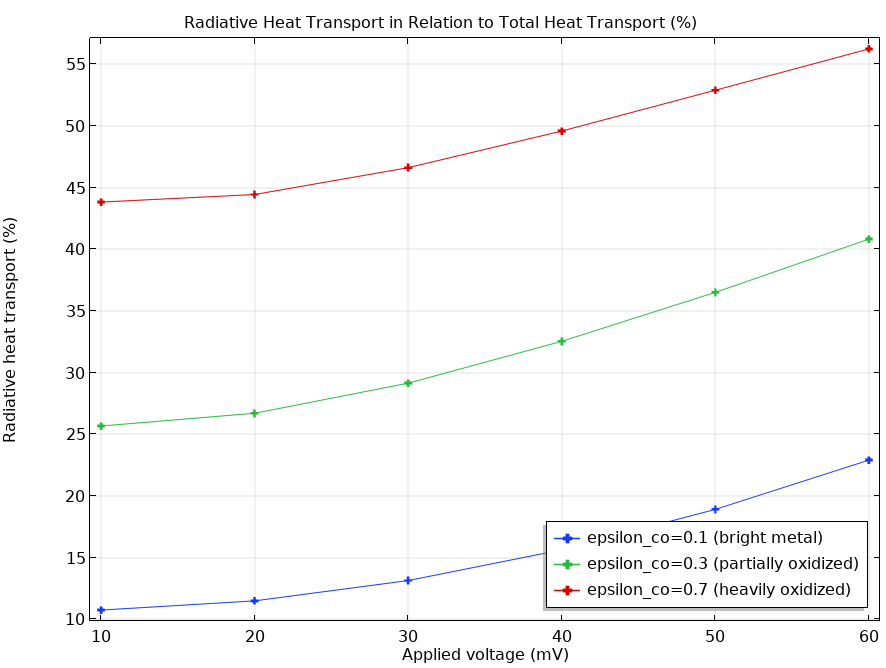 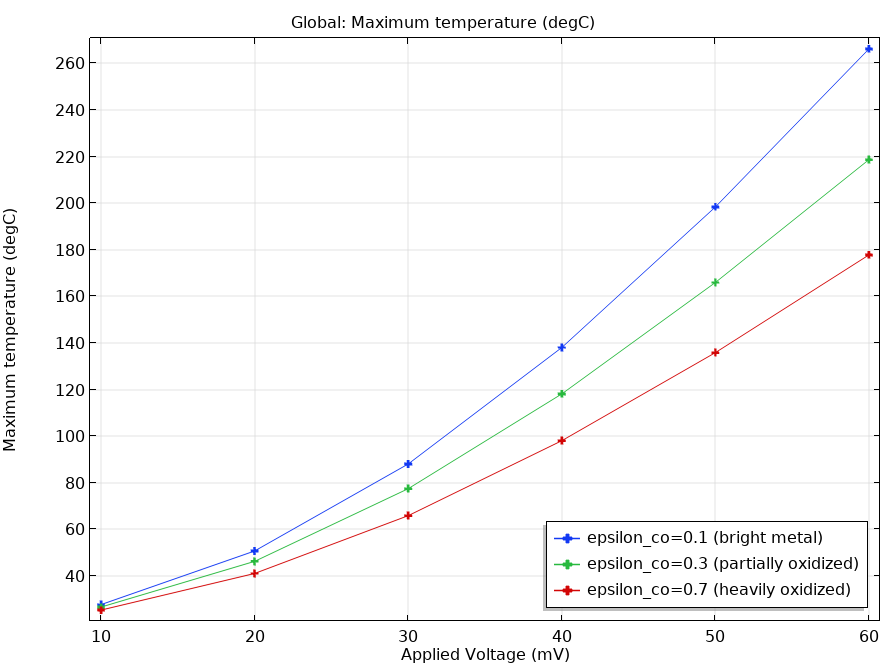 Percentage of thermal radiation in the total heat transfer of the busbar (left) and maximum busbar temperature (right) as a function of the applied voltage and for different degrees of surface oxidation.

Thermal radiation can be a major heat transfer process, and when in doubt, we should always check if radiation plays a significant role in the overall outcome of a model result. There are criteria to check this and, in case there’s still doubt, a comparative computation also helps. If thermal radiation is to be taken into account, the COMSOL Multiphysics® software provides the right tools that can be adapted to the respective requirements in order to implement thermal radiation correctly.

The busbar model with surface-to-surface radiation is available for download by clicking the button below.

Exploring the 4 Basic Modes of Electrophoresis

Thank you for your wonderful article it helps me a lot.

Hello Phillip, Is there a step-by-step documentation for the busbar with radiation model that you can share?

sorry, there is no step-by-step documentation for adding radiation to the busbar model. Please contact COMSOL support if you have questions about the steps.