“Equipped with his five senses, man explores the universe around him and calls the adventure ‘science.'” — Edwin Hubble

Imagine if the entire universe consisted of the Milky Way galaxy alone. Most scientists thought this was the case before astronomer Edwin Hubble discovered other galaxies. Considered the founder of extragalactic astronomy, Hubble was one of the leading 20th-century figures in observational cosmology and provided evidence that the universe expands at a constant rate.

Edwin Hubble was born in Marshfield, Missouri, on November 20, 1889. Gifted with both athletic and academic abilities, he broke basketball records in high school and was awarded a scholarship to the University of Chicago, earning a degree in mathematics and astronomy in 1910. His prowess in basketball and boxing earned him a Rhodes Scholarship to The Queen’s College, Oxford. Although he was still interested in studying science, he followed his father’s request to pursue a legal degree. 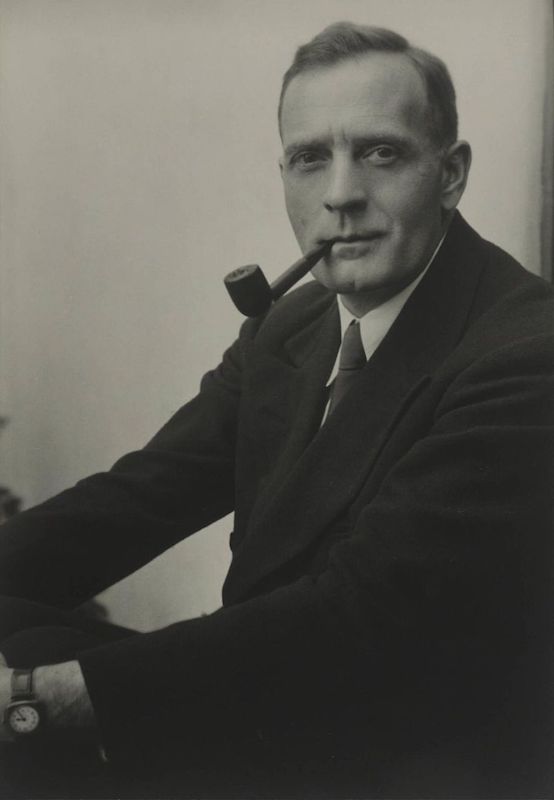 Edwin Hubble. Image by Johan Hagemeyer via The Huntington and in the public domain in the United States, via Wikimedia Commons.

After graduating, Hubble briefly worked as an attorney in Kentucky, but eventually took on a teaching position at a high school in Indiana and coached basketball. After the term ended in May of 1914, he decided to resume a subject he enjoyed: astronomy. The future observational astronomer once more entered the University of Chicago, this time as a graduate student, where he had access to a powerful reflector telescope at the Yerkes Observatory in Wisconsin. Hubble began looking toward the stars as never before…

The stars seemed to align for Edwin Hubble just as he was nearing the end of his graduate studies, when astronomer George Ellery Hale from the Mount Wilson Observatory offered him a job. The observatory’s 100-inch Hooker telescope, the most powerful in the world at the time, was almost finished with construction just as Albert Einstein’s theory of general relativity was opening up new concepts about the universe. It seemed meant to be: Hubble was ready to begin the career he always wanted, working with a state-of-the-art telescope and studying nebulae at a time when ideas about space and time were changing. Unfortunately, that same year, 1917, the United States declared war on Germany and entered World War I.

Hubble finished his exams and doctoral thesis and enlisted in the army, telegraphing his regrets to Hale. After serving in France and rising to the rank of major, Hubble came home in 1919 to find that Hale had kept the position at Mount Wilson Observatory open for him. He picked up where he left off and began his research in earnest. Hubble worked at the Mount Wilson Observatory for the rest of his days, aside from another interruption to his studies when he served in the army again for World War II.

The Great Debate: Unlocking the Secrets of the Andromeda “Nebula”

In the process of earning his PhD, Edwin Hubble studied “spiral nebulae”, faint, spiral-shaped stretches of light. During this time, Hubble crossed paths with Harlow Shapley, who insisted that the Milky Way was the only galaxy in existence and that spiral nebulae were contained within it.

Shapley spent his career trying to measure the size of the Milky Way using these star clusters to do so. Another astronomer, Heber Curtis, challenged this idea in what became known as the “Great Debate” or the “Shapley-Curtis Debate”. Focusing on the Andromeda cluster that Shapley insisted was a spiral nebula inside our galaxy, Curtis argued that Andromeda was similar to the Milky Way, not contained within it.

Hubble was the one to ultimately settle this debate. He used scientific contributions from both sides of the argument and added his own evidence, which proved spiral nebulae such as Andromeda are separate galaxies outside the Milky Way. In 1923, Hubble observed a Cepheid variable, a type of variable star, in the M31 “nebula” that made up Andromeda. Because fellow American astronomer Henrietta Leavitt discovered how to calculate the distance to Cepheids, Hubble was able to use the fluctuations in light of these variable stars to ultimately determine that the V1 Cepheid was much farther away than originally thought: an estimated distance of 900,000 light-years. This is far outside the borders of the Milky Way galaxy, which was thought at the time to be roughly 300,000 light-years in size. This astronomical distance led Hubble to the conclusion that Andromeda must be a galaxy distinct from the Milky Way. 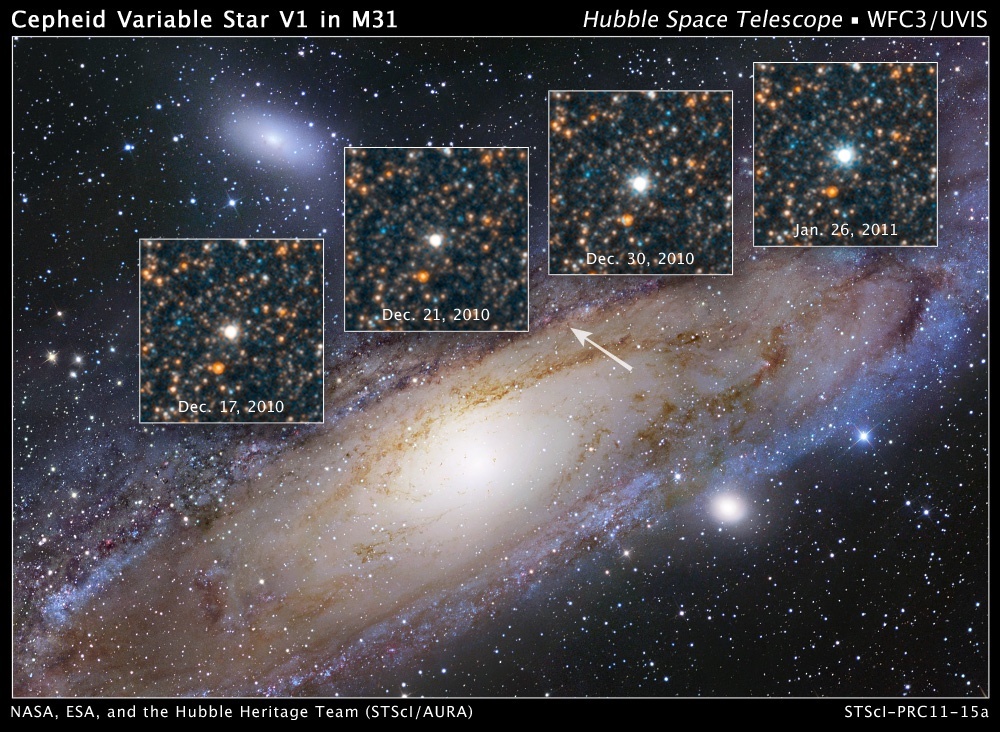 The V1 Cepheid variable that helped Edwin Hubble measure the distance between the Milky Way and Andromeda galaxies. Image by NASA, ESA, and the Hubble Heritage Team and in the public domain, via NASA.

While the current estimated distance between our galaxy and the Andromeda galaxy is even greater, at 2.48 million light-years, Hubble’s discovery was close enough to present a profound change in how we think about our place in the universe. In subsequent years, Hubble studied other nebulae and made similar observations. By the end of the decade, he had managed to provide enough evidence to convince astronomers that our galaxy is one among millions.

Classifying Galaxies Within the Expanding Universe

After discovering as many as 46 galaxies, Edwin Hubble classified them into ellipticals, spirals, and barrel spirals. He arranged this classification scheme into a tuning fork pattern known as the Hubble sequence. 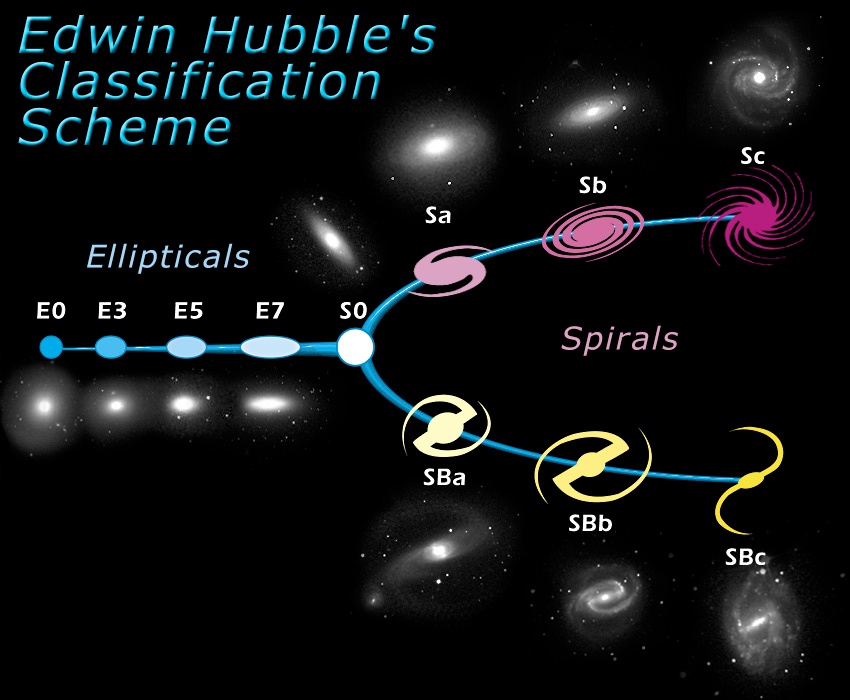 The Hubble sequence, a classification scheme of galaxies. Image by NASA and in the public domain, via Wikimedia Commons.

In the process of studying, measuring, and classifying galaxies, Hubble made another important discovery. Assisted by Mount Wilson Observatory astronomer Milton Humason, he noticed spectral shifts known as redshifts, in which light from a galaxy increases in wavelength due to the Doppler effect. If his interpretation about these spectral shifts was correct, it suggested that many galaxies were moving away from Earth. Further, their velocities seemed to increase in relation to their distance from our planet — the farther away they were, the faster they receded.

This observation, which became Hubble’s law, led scientists to determine that the universe is expanding. Several years earlier, Einstein had calculated this possibility, but had changed his calculations to align with scientific thinking at the time. Hubble’s observations showed that Einstein’s predictions of the expanding universe had been correct. The idea of an expanding universe paved the way for modern cosmology and the Big Bang theory, as well as some controversy: The Hubble constant, the variable used to describe the universe’s expansion rate, varies greatly depending on the method used to measure the expansion. The reason for this inconsistency is an ongoing mystery and subject of debate in modern cosmology and astronomy.

The Lasting Legacy of Edwin Hubble

Edwin Hubble played an important role in designing and building the Hale telescope at the Palomar Observatory in California. At 200 inches and four times as powerful as the Hooker telescope, the Hale telescope was the largest and most powerful telescope in the world until the 1970s. 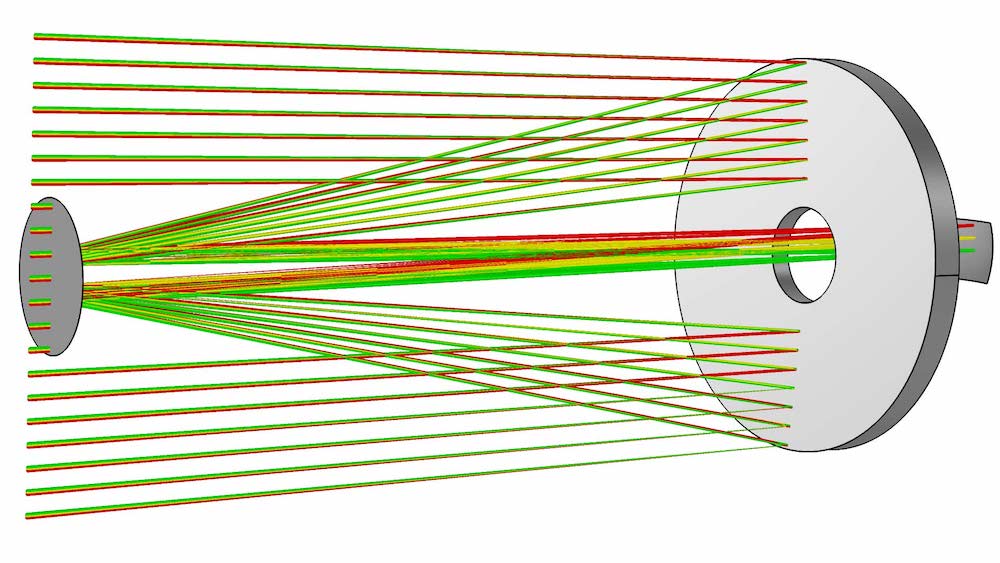 Ray tracing in a model of the Hubble Space Telescope.

In 1990, the Hubble Space Telescope (HST) was launched to continue the work Hubble started. In addition to its stunning photographs, the HST helped scientists discover that the expansion rate of the universe is accelerating, and the force behind this acceleration is dark energy.

To celebrate his many achievements and a legacy that lives on through the HST, let’s wish Edwin Hubble a happy birthday!

Find out more about Edwin Hubble and his many accomplishments:

Learn about other notable scientists:

Why Is My Coffee Maker Smiling at Me? Pareidolia Examined