We previously discussed analyzing electric motor and generator designs in the COMSOL Multiphysics® software, including how to examine the magnetic flux distribution, torque, losses, and iron usage in a rotating machine. We used an example of a 12-slot, 10-pole permanent magnet machine (PMM) with a diameter of 35 mm and axial length of 80 mm. In this blog post, we will investigate the variation of iron and copper losses, the resulting temperature rise, and its effect on the efficiency of the PMM. Since we are going to talk about losses, let’s begin by taking a look at a very fundamental aspect of rotating machine simulation: energy conservation.

This is the second blog post in a series discussing how to analyze different design aspects of rotating machines using COMSOL Multiphysics. Read Part 1 here.

Energy conservation can be examined by checking the relevant power values. For this, we will have a look at the power balance phenomenon in the context of rotating machine simulations. While modeling rotating machines, the stator and rotor iron are typically assigned a zero electrical conductivity, and the iron losses are computed separately using empirical models like Steinmetz or Bertotti. This is because the stator and rotor iron consist of stacks of laminations to minimize eddy currents.

If the bulk conductivity of iron were used, the numerical model would greatly overestimate the losses and compute a low net magnetic field; corresponding to nonlaminated iron. That is why iron losses need to be computed separately. Using this approach, the efficiency can be calculated as \textrm{Efficiency} = \frac{\textrm{Mechanical output power}}{\textrm{Mechanical output power + iron losses + copper losses}}. Here, we have chosen to neglect the friction and windage losses, since we know they constitute only a small fraction of the total loss (about 3%). When deemed necessary, these terms can easily be included.

The above implies that in electromagnetic FEM simulations, the electrical power input should be used to excite the magnetic fields, produce the torque on the rotor, and generate the copper loss. In terms of energy conservation, the electrical energy input should equal the sum of the mechanical power output and the copper loss. The instantaneous electrical power is given by P_i = V_a I_a + V_b I_b + V_c I_c, where V_a, V_b, V_c and I_a, I_b, I_c are the stator’s three-phase voltages and currents, respectively. The mechanical output power is given by P_o = T_r \omega_r, where T_r is the torque on the rotor and \omega_r is the angular velocity. 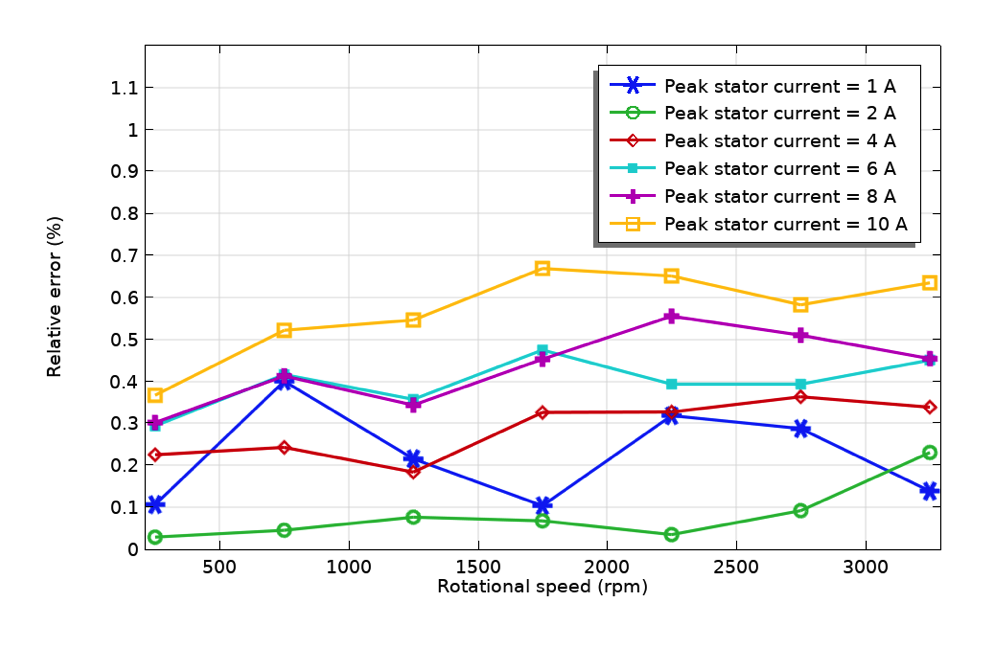 The instantaneous power balance can be examined by observing how the mechanical power output, the copper loss, their sum, and the electrical power input vary with time. To investigate the power balance further, the time average of the electrical power input and the sum of output power and copper losses is obtained, for various combinations of rotor speed and stator current. The relative error between the input power and output power plus loss is calculated. The maximum relative error evaluates to less than 1% over the entire range of variation. The power balance verification ensures that no unintended losses are present and gives us confidence in numerical analysis as a tool for rotating machine development.

Computation of losses is important due to their significance in the calculation of efficiency and the assessment of temperature rise. The iron losses consist of hysteresis and eddy current losses in the rotor and stator iron due to a time-varying magnetic flux density. The copper losses are the ohmic losses occurring in the stator coils due to conduction current flow.

Using the Parametric Sweep feature, we can investigate the variation of the iron and copper losses with rotor speed and stator current. The losses can be computed using the Loss Calculation subfeature available since COMSOL Multiphysics version 5.6. For the laminated iron, the empirical Steinmetz and Bertotti models are used. They give us the total loss due to hysteresis and eddy currents. The Bertotti loss model allows the user to specify the lamination thickness value. A fully User defined material model is available as well, with its own customized B-H curve. More advanced effects, such as anisotropy, can also be incorporated in the simulation. The copper losses are obtained using the Resistive losses option in the Loss Calculation subfeature (it is based on Ohm’s law). 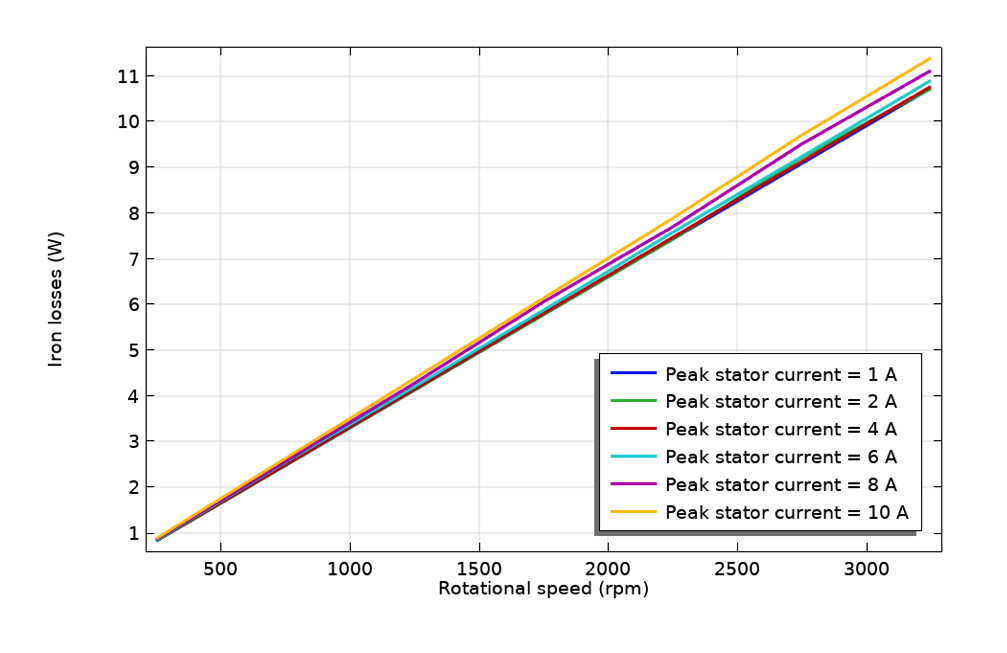 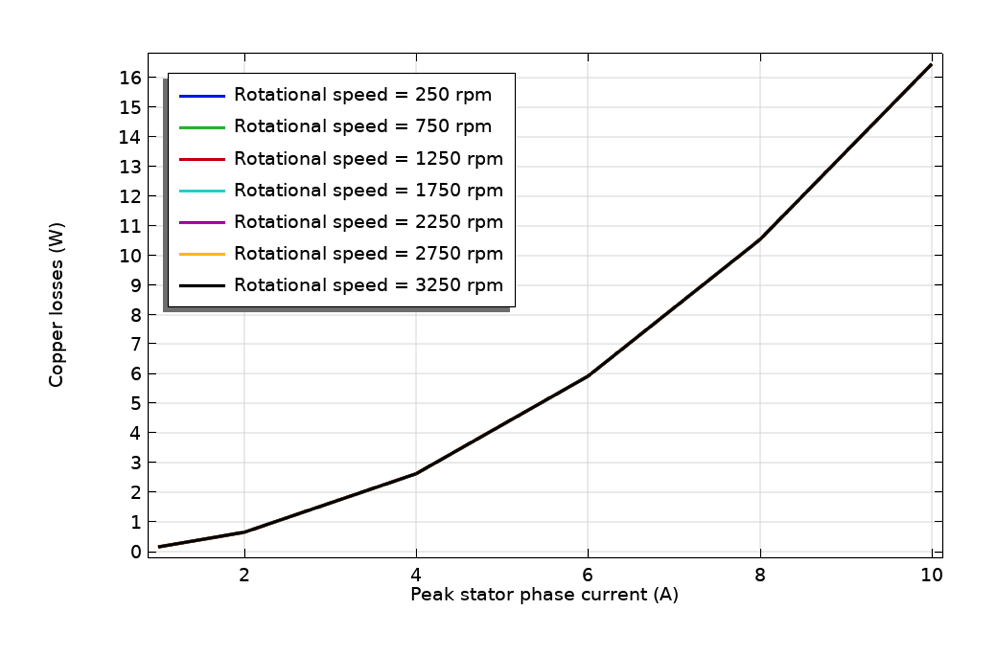 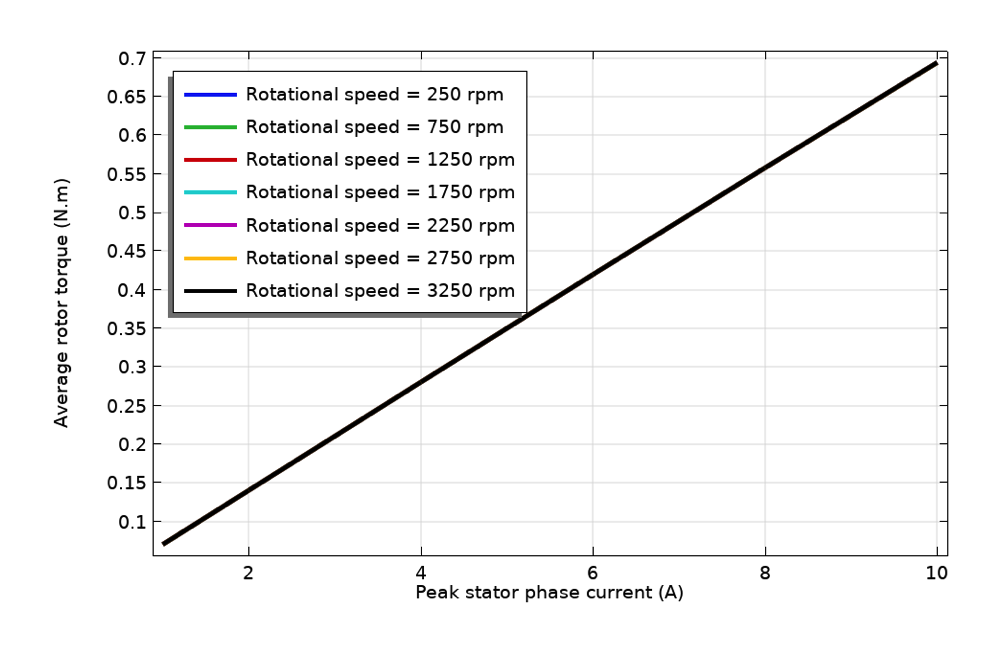 The iron losses vary linearly with the rotor speed and do not depend strongly on the stator current. This can be understood by correlating it with empirical loss models. Iron losses can be calculated by using the Steinmetz equation, which is given by W_i = K_h{B_m}^\alpha f, where W_i is the iron loss per unit volume, B_m is the maximum magnetic flux density, and f is the frequency of the magnetic flux density variation.

This expression suggests that iron losses vary linearly with frequency, which in turn is directly proportional to the rotor speed. Furthermore, the magnetic flux density in the iron is primarily determined by the magnets. The stator current only has a marginal effect. As a result, the iron loss scales linearly with the rotor speed and barely depends on the stator current.

The copper losses, on the other hand, are observed to vary quadratically with the stator current. This quadratic variation can easily be understood when looking at the formula for ohmic losses given by W_c = I^2 R_c, where I is the coil current and R_c is the coil resistance. In this case, as the Homogenized Multiturn Coil feature is used, skin and proximity effects in the coil are neglected — an assumption that is valid when the wires are thin with respect to the skin depth — and so the effective R_c does not depend on the rotor speed.

It will be interesting to compare the analytically generated efficiency map (using the empirical coefficients k_1,k_2,k_3) with the one obtained from a parametric analysis of our motor model.

Temperature rise impacts several aspects of motor performance. For permanent magnets, a temperature rise from, say, 20 degrees to 120 degrees, can cause a decrease in magnetic flux density up to 30%. This will cause a corresponding reduction in the rotor torque and resulting efficiency, which also could be up to 30%. The maximum allowable temperature rise is typically determined with regard to the insulation class of the stator windings and the demagnetization limit of the permanent magnet material. Empirically, it is found that every 10-degree rise in temperature above the allowable limit reduces the insulation life by half. If the temperature exceeds the insulation limit under extreme loading conditions, the consequence can be insulation failure, interturn short circuit, and ultimately the burnout of the stator coils.

The iron and copper losses computed using the Loss Calculation subfeature can be coupled to the Heat Transfer (HT) interface to analyze the thermal performance. The Heat Transfer interface in COMSOL Multiphysics offers several ways to investigate the cooling of the machine. Natural or forced convection can be modeled either implicitly — by using a heat transfer coefficient from the outer surfaces — or explicitly, by modeling a laminar or turbulent fluid flow over the outer motor surfaces. A comparative study of the steady-state temperature can be done under different cooling conditions to determine the most appropriate cooling method for a particular motor application. We will talk more about motor cooling, such as the optimal design of a water cooling jacket, in upcoming blog posts. 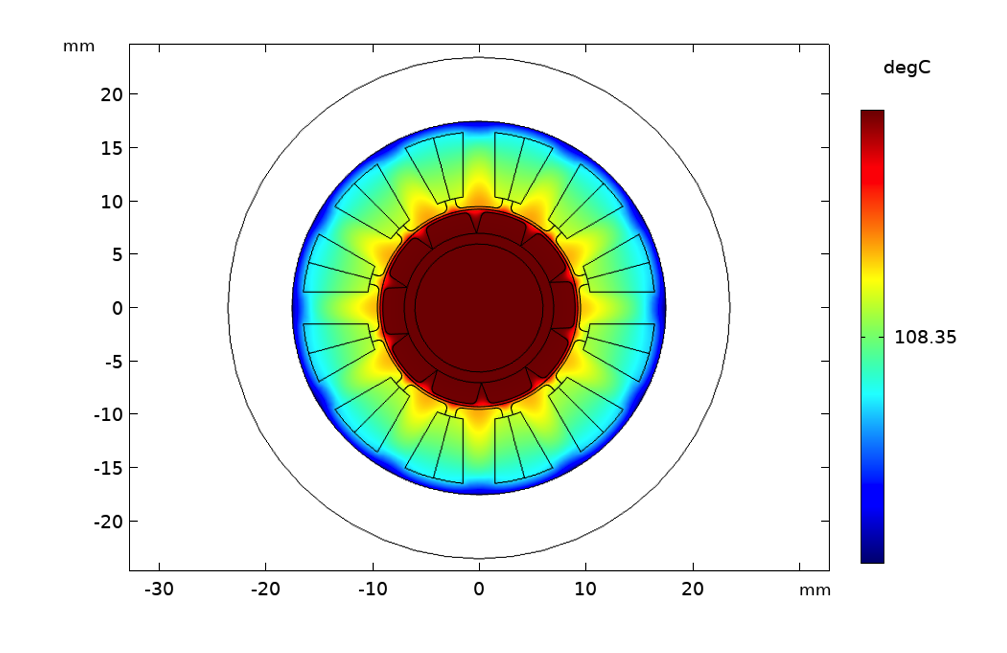 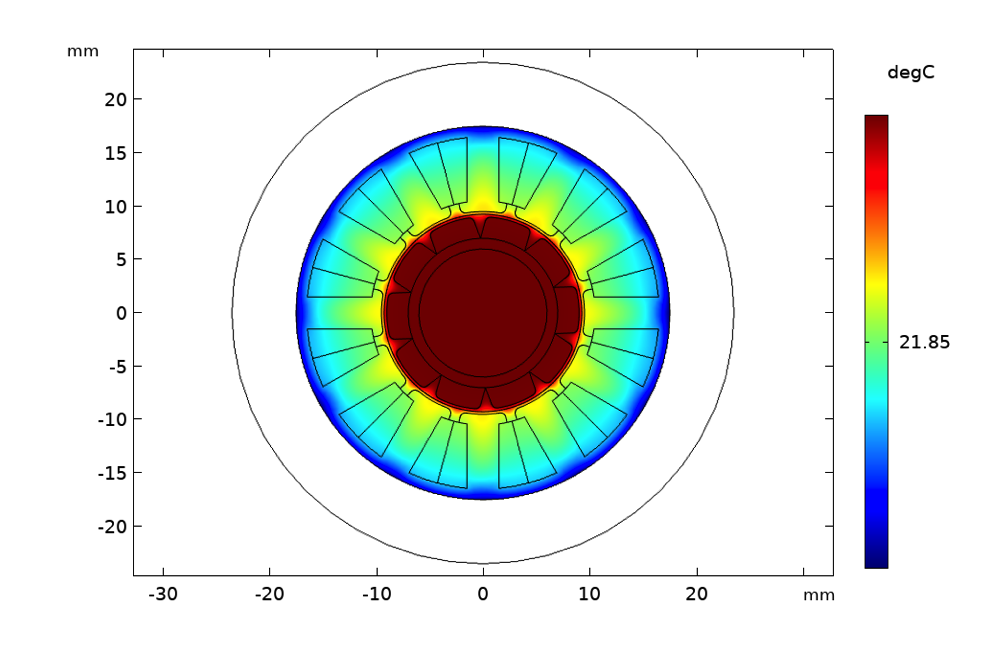 The surface plots show the temperature in degrees for a rotor speed of 3000 rpm and stator current of 2 A. In this case, simply by inspection, we can determine that insulation class 180 (H) will be needed if natural convection is used. If forced convection is used, the insulation requirement will be reduced to class 130 (B) and with water cooling, class 105 (A) insulation will be sufficient. Here, we are assuming that the material of the permanent magnets has been appropriately selected considering thermal demagnetization effects.

Investigating the Efficiency of Electric Motors

In the end, the analysis of a motor design is about finding its efficiency. Efficiency tells us what fraction of the input power is obtained as mechanical output. The efficiency of a rotating machine varies with the generated electromagnetic torque and the rotor speed. Ideally, it is desirable to operate the machine at its maximum efficiency, but in practice, the torque-speed curve of the load driven by the motor will also have to be considered. As a consequence, the motor will be used in a certain operating range. The next best approach is to choose a motor that has the highest efficiency values in the operating regime.

COMSOL Multiphysics offers built-in modeling features that empower you to easily generate the efficiency map for your motor design. The Force Calculation feature gives you the electromagnetic torque. The Loss Calculation subfeature helps you get the iron and copper losses. The Heat Transfer interface can be used to compute the temperature rise due to losses, which can be fully coupled to the Rotating Machinery, Magnetic interface using the Multiphysics node to include the electromagnetic effects of the temperature rise. Finally, the Table Graph feature allows you to plot the efficiency map. 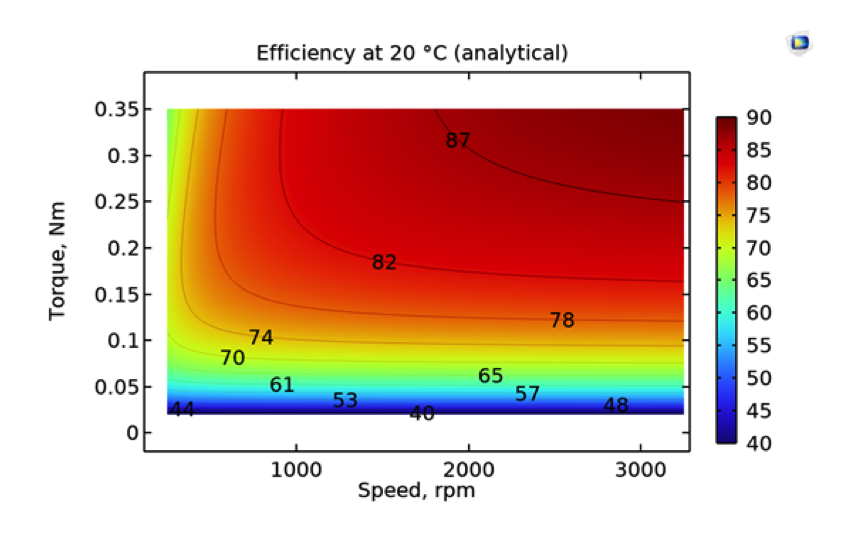 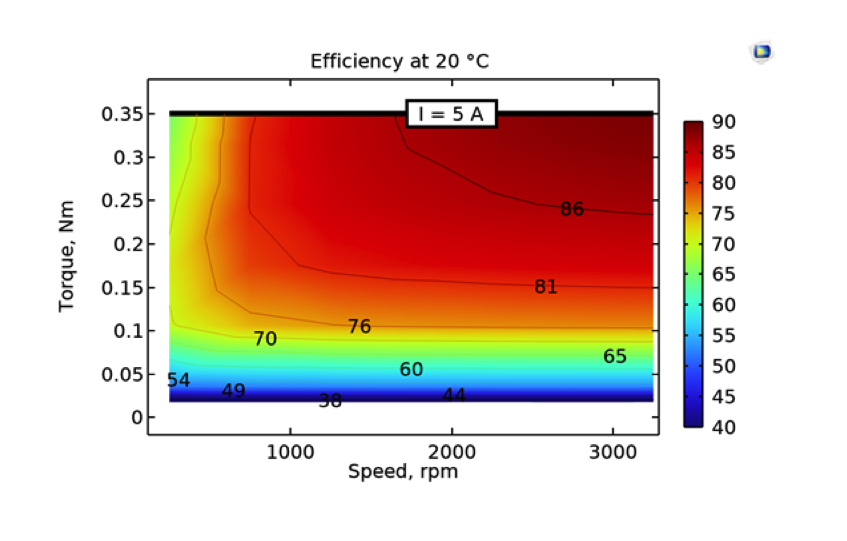 Efficiency map obtained from simulations including the effects of temperature rise (left) and a motor temperature map (right).

Unlike the first two efficiency maps, the third map includes the effect of temperature rise with natural air convection cooling. We can observe a reduction in the average rotor torque values for the same range of stator current values, after considering the effect of temperature rise. Furthermore, as the temperature increases at higher speeds (due to the increased losses), the torque reduces further because of a reduction in remanent flux in the rotor’s permanent magnets. This can be observed by following the line corresponding to “I = 5A” at the top of the plot. The net result is a change in efficiency distribution due to temperature rise. This helps to better evaluate the suitability of a given motor design for the application of interest. The temperature map shows the average stator temperature. It facilitates the determination of the required insulation class and the material of the permanent magnets by focusing on the relevant regime of motor operation.

We have briefly taken a look at the energy balance in the context of motor simulations. Such a power balance verification helps you to perform sanity checks on the results obtained from any FEM simulation tool.

Parametric analysis can be used to study the variation of electromagnetic torque as well as iron and copper losses with rotor speed and stator current. Such analyses can be used to extract the torque constant and empirical coefficients to estimate the losses at any speed and current value for a given motor design.

We investigated the temperature rise due to losses in motors, which makes a major impact on the electromagnetic torque, efficiency, the required insulation class and material of the permanent magnets. A comparative study of the temperature rise under different cooling conditions makes it easy to choose a suitable cooling method.

We finally talked about the efficiency map, a crucial tool to determine whether a given motor design meets the needs of an application. Examining the efficiency map after considering temperature rise allows us to make a refined judgement on the machine’s performance in the context of an intended application.

Try computing the loss, temperature, and efficiency of an electric motor yourself. Access the MPH-file for the model discussed here by clicking the button below:

Thank you Maithem for the prompt appreciation!

this is really good article, thank you for sharing with us https://bit.ly/3BjzHvi

Thank you Nikki for the appreciation!