In this set of eight tutorial models and associated documentation, you can investigate the resistive, capacitive, inductive, and thermal properties of a standard three-core lead-sheathed XLPE HVAC submarine cable with twisted magnetic armor (500 mm2, 220 kV). The series includes a 2D, 2D axi, 2.5D, and a full 3D analysis, and is on a par with the latest numerical research when considering both performance and level of detail. Validation is included: The results are analyzed within the context of the IEC 60287 standard, several recent papers, and analytical models.

The tutorials are intended both for industry experts looking to get up to speed on how to model such applications in the COMSOL Multiphysics® software and engineers and students interested in the finite element modeling of electromagnetic phenomena in general. The series is not only about cables: It is filled to the brim with useful numerical advice, good engineering practices, result evaluation, advanced postprocessing (including animations), and a detailed treatment of electromagnetic theory.

The series starts by going over the fundamental principles of the physics involved and then gradually increases in complexity by considering additional factors that will affect the cable’s performance. Results from the first models are used to build the next ones, all the way up to the final model: An industrial-scale 3D inductive model with separate lay lengths for the phases and the armor and built-in twisted periodicity. As such, the series can be used within the industry and at universities for a course on the numerical modeling of electromagnetic devices in general.

The Submarine Cable Analyzer demonstrates how the Application Builder in the COMSOL Multiphysics® software can be used to make advanced cable modeling available to a general audience. At its core is the technology introduced in the Cable Tutorial Series.

A summary of the first six chapters can be found in this blog post: Modeling Cables in COMSOL Multiphysics®: 8-Part Tutorial Series.

The last two chapters focus on 3D cable modeling. They are showcased in the following blog post: Using 3D Models to Investigate Inductive Effects in a Submarine Cable. 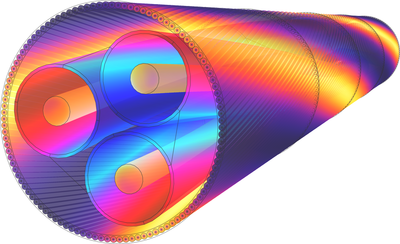 This model example illustrates applications of this type that would nominally be built using the following products:

however, additional products may be required to completely define and model it. Furthermore, this example may also be defined and modeled using components from the following product combinations:

The combination of COMSOL® products required to model your application depends on several factors and may include boundary conditions, material properties, physics interfaces, and part libraries. Particular functionality may be common to several products. To determine the right combination of products for your modeling needs, review the Tabella delle Funzionalità and make use of a free evaluation license. The COMSOL Sales and Support teams are available for answering any questions you may have regarding this.