Seawater can be converted into fresh water using solar energy. This is as an easy, suitable and green solution method to obtain heat for desalination. It is possible to concentrate the sunlight heat flux onto a small focal area by using a Fresnel lens. When the focal area is correctly located to an evaporation chamber, the obtained heat from the sun can significantly increase the temperature, and therefore evaporate the water, separating the salt. This water steam can be condensed to produce fresh water for human consumption.This project is about developing an efficient and portable solar technology desalination to obtain drinking water. The heater system has an internal core to act as the energy supplier for the chamber. The design and size of the core is determined by the amount of heat that it can transport and distribute to the chamber, where a uniform distribution of the heat is an important aspect. A 70 cm diameter curved PMMA Fresnel lens is used to heat the core of the water heater. The receiver focal plane that concentrates the heat from incoming sunlight has a diameter of 10 cm. The entire system was set to work at ambient temperature. From the Material Library copper was selected for the receiver, core and chamber and PMMA for the lens. The rod has of 52 cm height.

In order to analyze and test this project, a simulation using COMSOL Multiphysics® was used. Parts were drawn into COMSOL®, and the Fresnel lens was imported as STL file. Extremely Fine Free Tetrahedral mesh size was used for the receiver's surface and for the lens. Applying the Heat Transfer in Solids interface, from the Fluid Flow and Heat Transfer Modules, it was possible to simulate heat propagation and distribution in the system. Different Heat Fluxes were defined for each part. A Gaussian Pulse function was used to simulate the sunrays energy on the receiver. With Ray Optics Module, using the Geometrical Optics interface, it was possible to control ray trajectories. Features as Illuminated Surface, Wall and Ray Termination were also set up. The studies used were Time Dependent (4 hs) and Ray Tracing.

The current results are that the maximum and minimum temperatures obtained are 1092 K and 612 K, respectively. The Gaussian Function value was of 1.8E-5.
This project will continue to model applying Ray Heating with Bidirectionallly Coupled Ray Tracing, a STOP Analysis, plotting Spot Diagrams which shows the intersection points of rays with the surface and Electromagnetic Waves Beam Envelopes interface. Additionally, the same analysis will be performed for the Flat Fresnel lens. 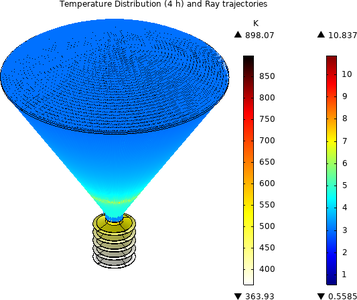