In recent years there has been a focus on using topology optimization in the field of acoustics [1,2], whereas previously the technique has been applied mostly within structural mechanics, thermodynamics, and fluid dynamics [3]. This paper describes the mathematical basis and shows examples of how the optimization can help make engineering decisions, and even come up with novel designs that traditional engineering approaches would not have been revealed.

Topology optimization is technique where a certain optimization domain is defined, and within this domain a single design variable can take on values between 0 and 1 continuously. Initially, one might choose a value of 0.5 for the entire domain, and during the optimization process the domain will preferably consist of binary values; either 0 or 1, as these express the extremes of the material. In figures this will be shown as white illustrating a design variable of 0, black is a design value of 1, and grey is an intermediate value of 0.5.

For acoustics, the extremes represent either air for a design variable of 0, or a heavy and stiff fluid, where the design variable is 1. The heavy and stiff fluid emulates a rigid structure, although the two are not always equivalent; a conversion from the optimized fluid domain to an acoustic domain with hard wall structures added is necessary to check the optimized design.

The heavy and dense fluid is represented by a density of ρsolid>> ρair, where ρair is the density of air. Similarly, two extreme values for the bulk modulus are defined with Ksolid>> Kair. The acoustic Helmholtz equation is written in terms of a general density and a general bulk modulus that vary in the optimization space.

The implementation in COMSOL Multiphysics® requires the Mathematics-PDE Interfaces and or the Pressure Acoustics physics, combined with Mathematics-Optimization and Sensitivity-Optimization physics.

It has been demonstrated how with acoustic topology optimization novel designs can be made, that meet certain requirements set by the engineer. The optimization routine has no sense of physics at all, and yet the mathematical framework can for example turn one distinct tube mode into another distinct mode.

Although the designs may seem non-intuitive at times, their effectiveness cannot be questioned. In the coming years there will most likely be a shift towards letting engineering decisions be tackled by optimization routines.

[2] Christensen, “How to Use Acoustic Topology Optimization in Your Simulation Studies”, COMSOL blog post, 2016, https://www.comsol.com/blogs/how-to-use-acoustic-topology-optimization-in-your-simulation-studies/ 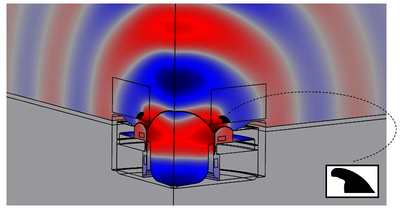